Periodic Limb Movement Syndrome (PLMS) is involuntary and repetitive movement of the lower limbs that tends to occur after 20 – 30 seconds. The legs are affected in most of the patients. However, the limbs of the upper body can also be affected. PLMS occurs periodically throughout the night but the severity varies from one night to another.

People with PLMS or those sleeping with such a person will notice muscle spasms that throw the legs upwards. These movements can last for a few minutes or even hours. PLMS does not discriminate between the genders. Though children can develop the condition, it is more common in people who are above the age of 65. 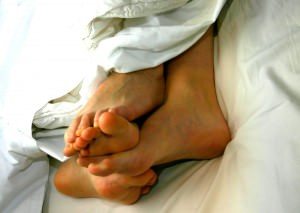 As suggested earlier, the patients are usually not aware of the movements. In fact, in most of the cases the bed partner is more aware of the movements. The person finds that they take longer to fall asleep. At times, they make wake up in the middle of the night without knowing what woke them up since the spasms only last for few seconds.

The exact cause of PLMS is unknown. But just like RSL it is related to kidney disease, iron deficiency and pregnancy. The first step in treatment is to differentiate it from its cousin RLS. Treatment involves the use of dopamine antagonists to reduce the tremors. Benzodiazepines can also be used to control the spasms. Engaging in relaxing exercises such as yoga is helpful. A hot bath and massage before sleeping goes a long way in easing the episodic tremors.