The word insomnia comes from a Latin word that literally means “no sleep”. Insomnia is the inability to fall or remain asleep. Persons with this condition do not wake up feeling refreshed or re-energized enough.

Insomnia, the most reported of all sleep disturbances, affects millions of people in the United States each year. Estimates of its prevalence vary widely. Some survey studies indicate complaints of insomnia in 30-45% of adults. Primary insomnia occurs in 1-10% of adults and accounts for 15-25% of cases of chronic insomnia (American Psychiatric Association, 2000). Insomnia is more common in women than in men. As noted previously, the elderly are at greater risk for developing insomnia than younger adults.

A problem with the epidemiological data is that some people who report subjective insomnia have no objective sleep deficiency; conversely, people who report themselves as normal sleepers may demonstrate significant sleep disturbances.

These people may not be aware of the disturbance because it produces no detriments to daytime functioning, or they may simply choose not to report it. Nevertheless, the prevalence of insomnia is great enough to merit further investigation.

However, before proceeding with a more detailed description of insomnia, it should be noted that sleep needs vary dramatically among individuals. Research tells us that the average adult needs 7-8 hours of sleep a night. Still, we must take this figure for just what it is: a statistical average with deviations in each direction.

Many adults can function normally on less than seven hours of sleep. Others may need more than eight hours a night to feel adequately rested. The important thing to remember is that insomnia is not strictly defined according to the number of hours a person sleeps each night. 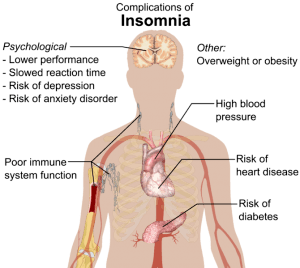 Insomnia: How common is it?

Studies carried out by the National Sleep Foundation NSF between 1999 and 2004 showed that about half of American adults have one or more symptoms of insomnia. The study also revealed that:

Insomnia can be subdivided into categories according to either (1) the cause of the insomnia or (2) the characteristics of the sleep disturbance. In the first case, insomnia is divided into primary insomnia and secondary insomnia. Primary insomnia refers to insomnia that is caused by a psychological disorder, such as conditioned arousal to the bedroom.

Secondary insomnia refers to insomnia with a medical or psychiatric basis. For example, a patient suffering from severe pain would likely experience sleep loss. In this case the disturbance in sleep would be labeled secondary insomnia. The remainder of this paper will focus on primary insomnia, as most research focuses on this type of insomnia and it is the type of insomnia most related to the field of psychology.

The Diagnostic and Statistical Manual of Mental Disorders, a publication by the American Psychiatric Association (2000), defines primary insomnia as:
a complaint of difficulty initiating or maintaining sleep or of non-restorative sleep that lasts for at least 1 month (Criterion A) and causes clinically significant distress or impairment in social, occupational, or other important areas of functioning (Criterion B).

Terminal insomnia is similar to sleep maintenance insomnia except the patient does not return to sleep for even a short time after waking during the night or early morning. Finally, non-restorative sleep is characterized by feeling unrefreshed after sleep.

There are 3 types of insomnia: transient, acute and chronic.

The transient type of insomnia typically lasts for less than one week. It is usually caused by a change in sleeping environment or sleeping time.  Sleeping pattern will go back to normal after the body adjusts to the new environment.

Acute insomnia extends for not more than one month. There is difficulty in initiating and maintaining sleep. The little sleep that is obtained is not refreshing enough leading to sleepiness during the day.

Chronic insomnia will last for more than a month. People who have stress and depression are the most affected. Its symptoms also include muscular irritability and hallucinations. Chronic insomnia can cause people to see things in slow motion.

The causes of insomnia vary from one person to another. The most common causes include:

Drugs used to treat the following conditions can cause insomnia:

People who suffer from insomnia report a variety of detrimental effects, the most common being decreased daytime functioning. Chronic insomniacs report more memory difficulties, increased work absenteeism, and fewer promotions at work than do their coworkers who receive adequate rest. Further, insomnia has detrimental effects on society as a whole, including loss of productivity, increased occurrence of accidents, and even rising costs of healthcare.

A recent report by Harrison and Horne (2000) examined the effects of sleep loss on the decision-making process. The authors list several problem areas for sleep-deprived decision makers, including:

These results, though not surprising, are cause for concern. Indeed, Harrison and Horne (2000) mention the connection between sleep deprivation and disasters such as the explosion of the Challenger space shuttle. Prevention of serious accidents like this may begin with a better understanding of the effects of sleep deprivation.

For example, a patient who suffers from depression may spend a great amount of time in bed, yet experience difficulty sleeping. Eventually, the patient becomes negatively conditioned for sleep and may experience insomnia even after the depression has been resolved.

According to the DSM-IV-TR, this situation would be grounds for a diagnosis of primary insomnia because the patient exhibits insomnia that stems from a psychological disorder but does not occur exclusively with the psychological disorder (American Psychiatric Association, 2000). The relationship between insomnia and depression will now be addressed in greater detail.

The best treatment remedies for insomnia actually comes from the patient. The patient with the help of an expert or by themselves should look back at their life and come with the cause. Coming up with measure against the cause is best therapy. It is also important to determine if the insomnia is the main condition or it is just a symptom.

It is important for insomniacs to create the best conditions for sleep. You should also help the brain who when to trigger sleep by developing bedtime habits like reading a book, sex or taking a warm bath. Spending the day out in sun helps to enforce the sleep cycle.