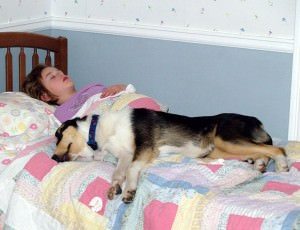 Most people especially children would sleep better with a pet in bed. For a child, a pet add a sense of security and comfort for better sleep. In fact, pets such as dogs and cat in a child’s bed have been associated with few cases of nightmares.

Dangers of Sleeping with Pets in Bed: Bedroom Zoonosis

Bubonic plague is a disease that is transmitted by fleas. A study carried out among plague patients in 2008 showed that 44% of them slept with pets in bed. It is almost impossible to know if a dog has bubonic plague because they show no symptoms.

This is a disease that is cause by protozoan parasites. Traditionally, these protozoan parasites have been spread by blood sucking bugs. However, recent surveys show that people sleeping with pets in bed especially dogs are a higher risk of acquiring this fatal disease. This disease is not common is US.

Streptococcus is a species of bacteria that infects humans especially when the skin is broken. MDRS is a variant of streptococcus that resist most common antibiotic and hence needs to be treated with special more expensive drugs. MDRS has been associated with people who sleep with their pets in bed.

The mouths and saliva of all animals including humans are not sterile. Dogs and cats harbor bacteria in their mouths that are safe to them but not in humans. Remember that cats and dogs are carnivorous and can therefore pick up harmful bacteria as they feed. As you sleep, the body loses consciousness increasing the possibility in getting infected with bacteria. It is even easy for a child to get infected with bacteria as they sleep with pets in bed.

Apart from the risk of being infected with microorganism, pets in bed can infect you with parasites. Examples of these parasites include:

Most experts that the risk of getting infected with above described infections is low but the bottom in is that it can happen. Here are important tips about pets in bed that you need to know about: