As you sleep, all the normal activities of the body are maintained though they are slowed down. One of these activities that has to go on during sleep is breathing.  Sleep apnea is a condition in which breathing is cut short for a few seconds during sleep and can occur 5 to 30 times in an hour. The word “apnea” in sleep apnea describes a brief pause in breathing. 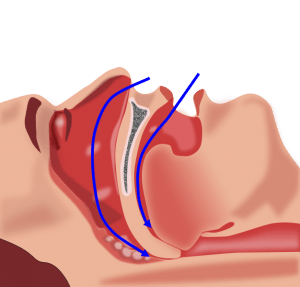 There are three types of sleep apnea: central, obstructive and complex. The most prevalent type of the 3 is the obstructive one and constitutes about 84% cases. Central and complex sleep apnoea constitute only 0.4% and 15% respectively.

The muscles of the body will ordinarily relax during sleep. The throat is made up of a muscle that can in some occasions not collapse/relax in sleep leading to obstructed breathing during sleep. Mild cases of sleep apnea are observed in persons who have an infection of the upper respiratory tract. Patients with OSA need to be treated as soon as possible to prevent sleep deprivation and hypoxemia – low blood oxygen during sleep. The symptoms of this OSA include:

This condition has been associated with a number of risk factors. They include:

Obstructive sleep apnea can affect persons of any age including children. If not treated early enough, OSA can lead to the following conditions:

Its causes emanate from the central nervous system thus the word “central”. In CSA, the brain’s feedback system that detects the levels of Carbon dioxide  in blood does not respond quickly enough. This way, the patient has intermitted sessions when breathing stops and then begins again. When breathing stops, the person does not struggle to breath and the chest does not move. However, soon after the patients breathes very quickly to compensate for the apnea.

This is the rarest type of sleep apnea. It is a mixture of the two types of sleep apnoea discussed above. It usually starts as a case of OSA. The CSA usually develops later on.

Treatments for this depend on the type. OSA is treated using a CPAP mask which allows air to flow smoothly in the airways. These conditions can also be treated using dental appliances that help to change the position of the jaw and tongue. In severe case, a surgery is recommended. There are drugs that can be prescribed to the patient to help the brain to faster detect the levels of carbon dioxide and increase the rate of breathing.