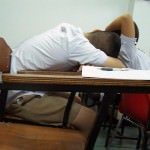 Statistics from the National Heart, Lung and Blood Institute (NHLBI) have revealed that there are asthma and sleep disorders affect close to 20 million Americans. During sleep, all the biological processes of the body including breathing are on. Asthma and sleep studies show that lung function is generally 10-50% lower at night compared to day in a healthy person.  This means that in a person who is already affected by asthma, breathing is really compromised especially if an attack occurs at night.

Asthma and Sleep: Effects of Asthma on Sleep

Asthmatic symptoms are seen when an allergen enters the airway and triggers and asthmatic reaction. During the inflammation, breathing is shallow leading shallower sleep. Asthma and sleep research shows that most people who suffer from nocturnal asthma attacks spend most sleep in NREM level of sleep. They spend very few minutes (which are often interrupted by symptoms of asthma) in REM – a stage of sleep associated with deeper and more relaxing sleep.

Asthma and Sleep: The Dangers

To start with, asthma and sleep studies have shown that majority of the deaths associated with asthma occur at night. The deaths could be because the patient is less likely to take urgent action to control the attack. Other reason put forth for increased sleep and asthma-related deaths include:

Asthma and sleep studies show that excess mucus is released during an asthmatic attack at night. If the mucus is produced in amounts that can block the airways, death is almost certain if the patient does not wake up or get immediate. Sleep and Asthma studies have listed the following symptoms as the main culprits for sleep problems in asthma:

The shallow sleep resulting from the above symptoms lead to the following symptoms during the day:

As pointed out earlier, asthmatic symptoms are always triggered by environmental factors. Therefore, identifying and eliminating these triggers is one of the best asthma and sleep management measure. Though the triggers for asthma vary among patients, here are the most common:

Asthma and sleep experts suggest that your bedroom should be free of allergen for better sleep. Cleaning your bedding regularly goes a long way in removing the allergens.

Make use of Peak Flow Meters

To manage asthma and sleep disorders, it is important buy and use peak flow meter. These meters are efficient at detecting lung function and warning the patient of an attack. The data from these meters will help you identify when you are least likely to get and attack. You are advised to sleep at this time.

Most asthma and sleep studies show that asthma attacks at night are common among those who do not follow the doctor’s prescription. In addition, if you suspect that an asthma drug is making you experience insomnia, talk to your doctor.