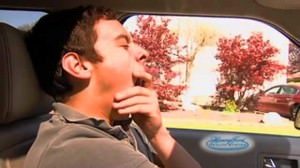 Sleep is important for maximum concentration as you drive. Drowsy driving occurs when a person drive a car when they have not gotten enough rest. It is thought than drowsy driving is responsible for many road and other industrial accidents. Collecting data on accident caused by drowsy driving is difficult because of the following reasons:

Even with the above challenges, estimates show that about 10-30% of accidents are a result of drowsy driving.

According to a poll done by the National Sleep Foundation, 60% of American drivers confess to have driven while sleepy. Even worse, 37% confess to have fallen asleep while driving. Majority of those interviewed could not tell whether they were asleep or drowsy driving.

The above symptoms can be used by third-parties to determine whether a driver is drowsy. As a passenger or a friend, it is in your interest to not allow drowsy driving. Conservative figures from National Highway Traffic Safety Administration show that 100,000 crashes are caused by fatigue and sleepy driving every year. This results in about 1500 deaths and over 71,000 injuries. The loss caused in by drowsy driving in terms of money translates into $ 12.5 billion.

Who is at risk of Drowsy Driving?

Blood Alcohol Concentration (BAC) of 0.08 is considered legally drunk. Poor sleep of up to 18 hours produces impairments than are equal to BAC 0.05. If the case of poor sleep is extended for 4 more hours, the impairment produced is equal to 0.1 BAC.

How to Avoid Drowsy Driving