Human beings sleep at night and are awake during the day. This is referred to as the sleep/wake cycle. This cycle is regulated by many other factors melatonin and exposure to light and darkness. 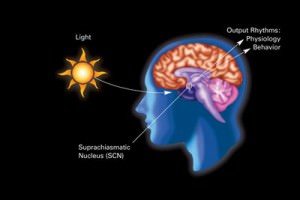 Melatonin is a hormone that is produced by the pineal gland in which is located in the brain. This hormone is utilized by the body to control the sleep/wake cycle in two ways:

Studies have found out that body temperature is slightly higher during the day than at night. This is important as it forces you to look for a place to stop being active and look for something to keep warm. In the modern world, one of the warm places could be the bedroom. Add the other effect of melatonin – causing drowsiness- and the body is surely forced to sleep.

In the infant, its levels are very high and only normalize after 3 three months after birth. This could account for the long sleeping hours – over 22 hours – in the first months of life. Its production goes down with age and is lowest in persons who are above the age of 60. The release of melatonin is thought to be delayed in teenage years leading to late sleeping and waking up hours.

For reasons that will be explained shortly, the levels of melatonin are highest between midnight and 8 am. This hormone is excreted mainly by the liver but also in urine and saliva.

The level of melatonin is controlled and triggered by exposure to light and darkness. In daylight, the pineal gland is inactive and does not produce this. However, as it becomes darker production of it rises and is released directly in the bloodstream.

Production of it rises as it gets darker and that is why its levels are highest at midnight to early morning. As soon as you get exposed to light, the levels start falling you get exposed to light. The effects of the hormone remain significantly high throughout the night and are back to normal at around 9 to 10 in the morning. The excretion of the hormone is so efficient that it is barely detectable during the day.

It does not only respond to natural light; it responds to artificial light too. It is therefore very important that all sources of light in the bedroom be switched off at night. Ideally, they should be switched off at the same time everyday.

On the flip-side, you must be exposed to as much natural light during the day as possible. Working in a dark place during the day can confuse the pineal gland so as to produce melatonin during the day. This would make you sleepy.

Melatonin is the only hormone in the US that is sold over-the-counter without a prescription. This is so because it is contained in some foods and therefore derived from them. The recommended dose is about 1 to 3 mg per day. Ideally, it should be taken at night as it can cause daytime sleepiness.

Remember a healthy person does not need the supplement provided they get exposed to enough daylight and enough darkness at night.