Sleep apnea refers to a condition where breathing is interrupted during sleep. In fact, the word “apnea” refers to a brief stop in breathing. The numbers of interruption vary from one person to another. Some people experience only a few interruptions per night while others get tens or even hundreds of interruptions. Sleep apnea lowers the deepness of sleep since the brain and body lack oxygen during the apneas. 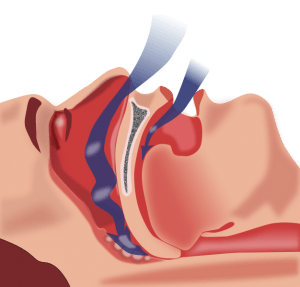 Sleep apnea can be divided into Central and Obstructive. Obstructive sleep apnea (OSA) is the more common of the two and results when the airway is blocked. Blockage occurs when the soft tissue behind the throat collapses as you sleep.

In Central Sleep Apnea (CSA), the airway is not blocked. In CSA, the brain is not able to properly coordinate the muscles involved in breathing. Due to this, apneas occur. In other words, the respiratory control center of the brain does not function properly in CSA.

It is estimated that close to 18 million Americans have sleep apnea in a varying range of severity. Prevalence in children varies between 2 and 3%. However, children who snore frequently have a 10 to 20% chance that the snoring is caused by sleep apnea.

This condition is closely associated with obesity. In obesity, the neck is enlarged causing breathing difficulties. Studies suggest that neck size of above 17 and 16 inches in men and women respectively is a predisposing factor. Persons with a large neck, uvula, and tonsils are predisposed. Other major risk factors are listed below:

The most outstanding symptom of sleep apnea is frequent snoring. However, not all cases of snoring are caused by apnea. The other symptoms are more or less as a result of sleep deprivation.

If sleep apnea is not treated quickly, the following health problems can result:

As pointed out earlier, increased weight is a predisposing factor. It cannot be overemphasized that you need to lose weight after being diagnosed with sleep apnea. In most cases, this condition is cured or helped tremendously by losing weight.

CPAP stands for Continuous Positive Airway Device. It is a device that is worn on the nose and /mouth which helps to keep the airway open during sleep. Though this method is effective in treating sleep apnea, it should be recommended by your doctor. CPAP devices bought over the counter could do more harm than good. Remember that CPAP does not cure; it only relieves the symptoms.

The condition can also be treated using dental devices that help to keep the airways open as you sleep. These devices are best custom-made by a dentist for you. Surgeries to reduce the size of the uvula or tonsils can also be helpful.