The Restless Leg Syndrome or RLS is a serious condition that has for along time been misdiagnosed or undiagnosed. In the US, it is estimated that about 10 % of the population suffers from this neurological disorder that forces the person to move their legs in order to achieve temporary relief. The tingling or itchy feeling usually gets worse when the person is at rest. Sleep is most affected as it is the most result part of the day.

In general, the tingly sensation felt in RLS usually increases as the day gets old. It has been observed to run in the family and a gene that increases the chances of developing the diseases has been identified. RLS can be classified into two: Primary and Secondary. 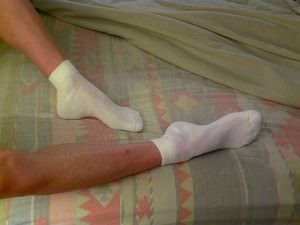 Primary Restless Leg Syndrome is the most common type. It is also referred to as familiar as it is passed down the family tree. This type of RLS is also described as idiopathic as it has no known cause.

Both types of Restless Leg Syndrome do not discriminate against age, gender or race. While the symptoms of RLS occur at a young age, they tend to get worse with age. The symptoms are even more severe in adulthood if they started in childhood. RLS symptoms mostly affect legs. However, they can also affect the following parts of the body with same tingly feeling:

What are the symptoms of RLS?

Pregnant women are at a higher that normal risk of getting RLS. It is more common in the last trimester of pregnancy. In most cases, the symptoms will go away after birth. For other women, the signs of RLS will continue even after birth. Women who get Rest Leg Syndrome during pregnancy are more like to develop it later in life.

At this point, there is still no known cause or cure for RLS. However, the symptoms can be managed using drugs and lifestyle changes. You should therefore see your health care provider for more advice. Here are some helpful tips on how to manage RLS:

Though the condition is not curable, the symptoms are manageable.